Our second briefing covered the Middle East, with speakers Ambassador Jim Smith and former CIA Station Chief Steve Slick. You can see pictures of the event here and the video here.

The third briefing in the 4-part series will be December 5 at 4 pm at the Heritage Ranch Country Club, 465 Scenic Ranch Circle, McKinney, TX. The discussion will cover Europe and Russia, areas of the world which occupied our full attention from the end of World War II until the end of the Cold War in 1991, but which have since been overshadowed by the war on terrorism and more lately, China. Nevertheless, Russia is still seen by a majority of Americans as our #1 existential threat and other European regions present a range of a range of military, economic, political and cultural challenges which have the potential to flare up at any time.

Our discussion will feature two speakers with broad experience in the area. 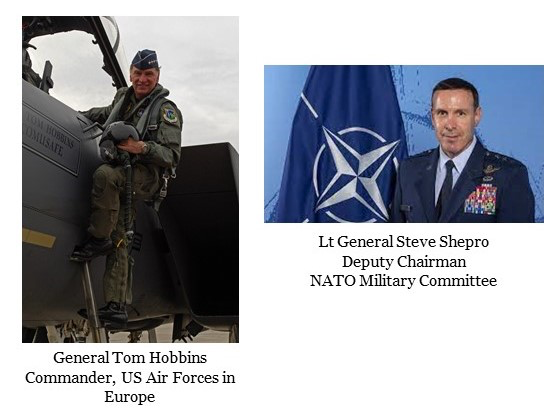 General Tom Hobbins (USAF, ret) served in the US Air Force for 38 years, and has over 5000 flying hours in the F-15C, F-15E and A-10.  He commanded at the squadron, wing and numbered air force level and held a number of key staff positions including Chief of Warfighting Integration and Chief Information Officer, Office of the Secretary of the Air Force.  In his last assignment, he was Commander, US Air Forces in Europe (USAFE) and Commander, NATO Air Component Command, in which position he was responsible for all US air force operations in Europe. During his tour as USAFE Commander, he became one of the only four-star US generals to be invited to fly front-line Russian fighter aircraft.  General Hobbins currently consults for and advises a number of defense-related businesses.

Lieutenant General Steve Shepro (USAF, ret) is currently Vice President, Global Business Development for Fixed-Wing Aircraft, Boeing Defense.  He serves on the Board of Directors of the Olmsted Foundation, is a Teaching Fellow at SMU’s Tower Center of International Affairs and Public Policy, is a Senior Mentor of the NATO Defense College, and a member of the Council on Foreign Relations.  General Shepro served in the  US Air Force for 35 years and commanded multiple operational wings, groups and squadrons.  In his last assignment, served as  21st Deputy Chairman of the NATO Military Committee, the most senior military structure in the Alliance that defends almost one billion citizens with over half the world’s gross domestic product and defense budget.

We’ll have a robust Q&A session as part of the discussion, but if you have questions you’d like the panelists to address, you can email them in advance to ndbs.questions@gmail.com and we’ll pass them on to our speakers. You can also use this email during the discussion to send questions for the Q&A session.

The last briefing was nearly sold out and we anticipate this one will be completely sold out, so sign up now!  The link below will take you to the registration page on the  Dallas Navy League, which has graciously volunteered to handle registration and payment. Event tickets include the briefing and discussion, a Q&A period, and a post-event social with hors d’oeuvres and a cash bar. Space is limited, so don’t delay signing up, and please consider the event Patron and Sponsor opportunities, which are a great way to reserve your spot at the table and show your support for these organizations and their charitable work.

Event Patron – $1,000 – Banner and Recognition on Sponsor Slide, Table for eight with Table Sign, Name or logo on all publicity

For information about the event, sponsorship or registration, please contact:

Sponsorships are a great way to support our veterans organizations and be part of a substantive and informative series.  We will be expanding the opportunities, but for now they include a series of shooting clinics conducted by Robert Epstein at the Dallas Gun Club.  Bob is a certified NRA instructor and the Dallas Gun Club is the premier shooting facility in the DFW area.  Bob is concentrating on Defensive Shotgun clinics due to the current ammunition shortage, but if you would like a handgun clinic, he’ll accommodate when the ammo situation improves.  All clinics include range fees, ammunition, protective gear and instruction.

All gun clinics include shooing fees, ammunition, weapons, protective equipment and instruction.
All sponsorships include recognition at all events and in publicity.