The National Defense Security Briefing Series is a program of quarterly discussions on issues and areas of the world where US vital national interests are at stake in the 21st Century.  The series is jointly sponsored by the Dallas Chapters of the Navy League, the Air Force Association, the Military Order of the World Wars, and the Jewish War Veterans.  All discussions are conducted under a non-attribution policy to encourage a candid and open discussion.  In addition to providing an opportunity to hear and interact with national security experts, the series will help raise funds to support the charitable work of these organizations.   We’re pleased to welcome Randolph Brooks Federal Credit Union as one of our first sponsors.  Please scroll down to the bottom to learn about our sponsorship opportunities.

The second briefing in the 4-part series will be September 12 at 4 pm at the Heritage Ranch Country Club, 465 Scenic Ranch Circle, McKinney, TX.  The topic will be the Middle East, a region which presents an increasingly thorny set of strategic challenges to the United States.  Our discussion will feature two speakers with broad experience in the area. 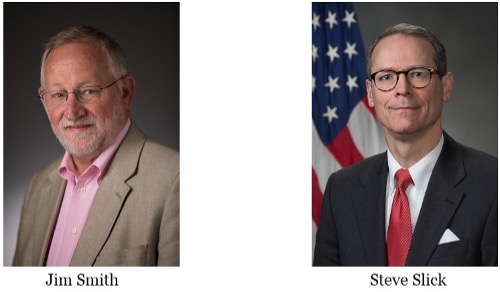 Ambassador (Brigadier General, ret) Jim Smith was ambassador to the Kingdom of Saudi Arabia from 2009 to 2013.  Prior to his diplomatic service, Jim served 27 years in the U.S. Air Force as an F-15 pilot and wing commander.  He flew combat missions in the Middle East, retiring in 2002.  Currently he serves as CEO of Crosswinds Strategic Consulting, focusing on business, education, healthcare and women’s initiatives in the Middle East.

Steve Slick is Director of the University of Texas at Austin’s Intelligence Studies Project and clinical professor at the LBJ School of Public Affairs.  Before joining the LBJ School, Steve served for 28 years in the CIA’s clandestine services.  He served as Chief of Station and representative of the Director of National Intelligence in a Middle Eastern Capital. He was formerly on the staff of the National Security Council.

The first briefing was nearly sold out and we anticipate the second briefing will be completely sold out.  We plan to open general registration August 1.  Event tickets include the briefing and discussion, a Q&A period, and a post-event social with hors d’oeuvres and a cash bar.   Space is limited, so don’t delay signing up, and please consider the event sponsor opportunities, which are a great way to reserve your spot at the table and show your support for these organizations and their charitable work.

Event Patron – $1,000 – Banner and Recognition on Sponsor Slide, Table for eight with Table Sign, Name or logo on all publicity

TICKETS WILL GO ON SALE 8/1

Randolph Brooks Federal Credit Union is our first sponsor, but we have more opportunities available.  Sponsorships are a great way to support our veterans organizations and be part of a substantive and informative series.  We will be expanding the opportunities, but for now they include a series of shooting clinics conducted by Robert Epstein at the Dallas Gun Club.  Bob is a certified NRA instructor and the Dallas Gun Club is the premier shooting facility in the DFW area.  Bob is concentrating on Defensive Shotgun clinics due to the current ammunition shortage, but if you would like a handgun clinic, he’ll accommodate when the ammo situation improves.  All clinics include range fees, ammunition, protective gear and instruction.

All gun clinics include shooing fees, ammunition, weapons, protective equipment and instruction.
All sponsorships include recognition at all events and in publicity.